Super Salad: eat and be inspired 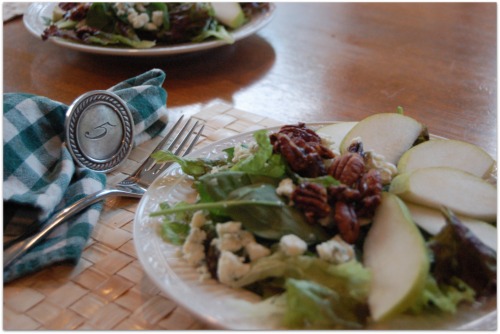 My mom is a great cook.  She’s one of those naturals who, out of love for health and the desire for her family’s well-being, chooses the purest ingredients and whips up the best meals — and not just around the holidays. Growing up I never ate burgers or mac and cheese, but developed a (snobbish?) taste for tuna steaks and eggplant parmesan and Caprese salads. Surprisingly, although I always acknowledged Mom’s flair, I never took an interest in learning to cook.  I don’t really know why.  Maybe it was the part of me that swore I’d never grow up, that Mommy would be there to cook for me always.

Well, when I graduated from college with two degrees and an F- in the kitchen, I decided that one of my “New Summer’s Resolutions” would be to learn to cook.  Or at least some basics of cooking.

Because I am leaving for France in September, and it’d be a darn shame if I couldn’t replicate some of Mom’s healthy comfort food — or just make myself a good dinner in the country that’s known to have the best ingredients on the market.

So far I’ve bitten off (almost) more than I can chew.  I bought Mireille Guiliano’s cookbook (You know — that lovely lady of French Women Don’t Get Fat fame) and made Salmon en Papillote (wrapped up like a present in parchment paper), then Chicken en Papillote…a bit fancy for my beginner status.  Leave it to me to dive right in.

Yesterday I made a simple salad with pears and gorgonzola, but I was impressed with the outcome because it was one of the first times I worked without a recipe.  Mom, Aunt Caroline, and I had eaten at The Butterfly Garden a few weeks back and after all three of us indulged in the same salad, I became determined to replicate it off the cuff.  It took a few weeks to face the challenge, but, I did it.  The secret was in the “finishing touches” that made the salad different from typical old spinach with pear.  I candied the pecans (which turned out to be really easy! Hooray!).  I made a special Dijon vinaigrette with honey to sweeten it a bit.  And, I arranged the servings individually.  That’s it!  It was so yummy.  And it gave me confidence.  I’ve been “cooking” for a month now, and things are starting to look up.

As a matter of fact, I just read David Lebovitz’s post about interning at a French restaurant.  Maybe I’m too big for my britches, but now that I’ve made this salad, I might raise the bar a bit: I could become a stagiere in France…

7 responses to “Super Salad: eat and be inspired”